Home > Other World Interaction > Making Contact With Departed Loved Ones 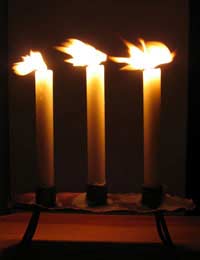 Almost all of us have experienced the loss of someone we cared about. For some it’s something we can never get over. Grief can be all-consuming and we recognise that the loved one’s presence was something that made us feel whole.

In some cases, the parting is especially bitter. The death may have been abrupt and unexpected. Something may have been left unsaid between you – some issue unresolved. Perhaps the relationship had deteriorated badly and it was only with their death that you realised how much the other person meant to you. Whatever the reason, the urge to communicate with the dead is widespread, and many believe that it is possible.

It should be pointed out that if you are deeply grieving the loss of a loved one, you are emotionally vulnerable and therefore, ripe for exploitation. The history of spirit communication is replete with tales of fraud and charlatanism. This is not to say that no mediums are genuine or that no contact is possible. But you should at least be wary.

If you choose to delve into this area, try to have a friend accompany you. Your friend will be able to be more objective about the situation and hopefully, can give you some sensible advice when you need it. There are many companies claiming to offer spirit contact or personal prophecies about your future over premium-rate or billed-to-your-credit-card phone lines. Some even do it via text-messaging! Most of us would find it difficult to take this sort of thing seriously but, clearly, enough people do or these companies would go out of business.

The most obvious way of attempting to communicate with the dead is through a séance. Some séances involve spirits communicating through some primitive means such as table raps or a Ouija board; in others, a medium - a person said to be endowed with special sensitivity or “psychic powers” - will relay messages from the spirit world to the rest of the people present.

It’s possible to hold your own séance. You can find more information giving you guidance on how to do it in How to Hold a Seance. Otherwise, you can attend a public meeting.

Spiritualism is a religion based around the practice of spirit contact and the idea that this life is not the end for us, but that the essence of our personality, our soul if you like, continues to exist in some form. Spiritualist “churches” exist around the UK. These regularly hold séances, many of which are open to members of the public who are not affiliated with the church. If you’re interested in attending any of these meetings or in learning more about the religion, you should visit the website of their collective association, the Spiritualists’ National Union.

Another option for making contact with departed loves ones is through Electronic Voice Phenomena. You can read our full article about it at Listening to Ghosts.

In the last decade or so Allan Botkin, an American psychiatrist, has pioneered a technique which he calls Induced After-Death Communication (IADC). It emerged from a well-established therapeutic technique called Eye Movement Desensitisation and Reprocessing (EMDR) which is used to treat people such as rape victims or soldiers who suffer stress from traumatic memories. The distinctive feature of EMDR, and the thing which earns it its name, is the practice of moving the eyes from side to side while focusing mentally on something else. This mimics the way in which our eyes move when we are asleep and some practitioners say that it increases our cognitive processing.

How it Came About

Botkin stumbled into IADC when treating a soldier who had participated in the Vietnam War. The soldier had become fond of a young Vietnamese orphan he had come into contact with, and hoped to adopt her and take her home to the United States. Unfortunately, before this could happen, she was killed in a sniper attack. The soldier was grief-stricken and, on his return from the war, was so deeply affected by the experience that he became inward-looking and socially dysfunctional.

When undergoing EMDR therapy with Botkin, a smile broke out on the ex-soldier’s face and he suddenly seemed to be utterly content. Abbott asked later what had occurred and his patient told him that he had seen the spirit of the dead Vietnamese girl and spoken to her. She appeared to him as a mature adult and thanked him for the concern he had shown for her. All of this had taken place entirely within the patient’s mind. Botkin could not see or experience any of it. Despite this, the patient was convinced that the communication was genuine and was so inspired by it that he was soon able to get his life back on track.

Botkin was intrigued by this. As a therapist, he noted that the experience had had a strong therapeutic effect. He found that some of his other EMDR patients had similar experiences and he worked to refine his methodology in order to make these “contact” experiences more frequent. Soon, he was able to induce after-death communications in the vast majority of his patients and he began to focus entirely on this area of his work. Botkin reports that almost all of his subjects were sceptical of the technique before undergoing the experience and that similarly, almost all are convinced of its genuineness afterwards. His clients absolutely believe that they have been in contact with the dead and many return over and over again to enter into dialogue with the spirits of people they cared about.

The “contact” is an internal visionary experience, somewhat like a dream, but the client retains full consciousness throughout. Extended conversations with the spirits of the departed can be held, and the spirits themselves are said to typically display the kind of emotional maturation one would expect from the experience of death!

Is it real or is it just a form of conscious dreaming? No one can say for sure, but according to Botkin, almost everyone who experiences it is convinced that it is real.

Botkin has since founded the Institute for After-Death Communication and has trained other practitioners in his technique. Unfortunately, at this moment, none appear to be located in the UK but perhaps the practice will reach British shores soon.

If you want to communicate with the spirits of the people you loved, you are advised to explore some of the possibilities described here with an open mind – but not too open. Posthumous communication may or may not be a reality, but fraud certainly is. Many people have found contentment in pursuing these paths, however, so perhaps you can too.
Next Page

How to Create Your Own Ghost
Share Your Story, Join the Discussion or Seek Advice..
Hello Team, Hope you are doing great. I feel so curious to know your thought and help you to expand your website’s promotional to protect and creating massive traffic for your business growth. I have visited your website and found some factors where we need to focus on for a better campaign. Please find below some of the major areas:- - Key phrases selected for your site are not competitive enough to present you on first page. - On page and website issues are the major setback leading to non-performance on search engines. - Search based landing page relevance has been broadly ignored, leading to higher bounce rate. - Aggressive Social media promotion will help you to achieve brand visibility. We will take all the responsibilities in making the website performance grow faster and you can dedicate your time & energy on new businesses acquisition. This Email just provides you the glimpse of information, if you have any type of queries to discuss what latest technologies we have adopted and how it can significantly improve your online presence. Let me know your thought and if possible give me the best time to make further discussion. Kind Regards Sidharth | Sir Web Analyst -------------------------------------------------------------------------- PS I. If you are interested, then reply us "Send your Proposal and Price list" PS II. If you are not interested, then send "Remove or No"
Sidharth Pattnaik - 17-Jun-21 @ 6:03 AM
I live in Suffolk, uk and would like to learn of a weekend course where perhaps I may find peace and a form of communication with those that have passed. If anyone has any info on authentic practitioners I would be most appreciative.
Crinna - 9-Nov-17 @ 10:26 PM
Title:
(never shown)
Firstname:
(never shown)
Surname:
(never shown)
Email:
(never shown)
Nickname:
(shown)
Comment:
Validate: