Home > Other World Interaction > How to Create Your Own Ghost

How to Create Your Own Ghost 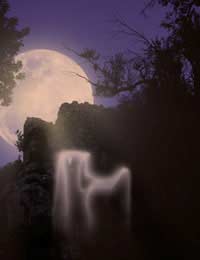 Have you ever wanted to create your own ghost? In the 1970s a group of Canadian researchers did just that. By following their technique perhaps you can do the same.

In 1972 a group of Canadian researchers who were members of the Toronto Society of Psychical Research speculated that certain paranormal phenomena such as, for example, poltergeist activity, might have their roots, not in some external entity, but in the hidden power of the mind somehow leaking out into material world, creating real and tangible effects. They decided to test their theory out by attempting to create a ghost.

One member of the group drew up a fictitious history for their ghost. He was to be a 17th century English nobleman called Philip Aylesford. Although he was married, he had met and fallen in love with a wild, gypsy girl and installed her as his mistress in a cottage close to his castle. Unfortunately, Philip’s wife found out about the affair and took steps to have the girl tried as a witch. As the trial proceeded, Philip could have intervened at any time to save the girl but shame or embarrassment prevented him from doing so. In the end, the girl was convicted of witchcraft and burnt at the stake.

Tormented by guilt, Philip paced his castle’s battlements and eventually threw himself off in despair.

The group memorised Philip’s life history. They drew pictures of him. One member even visited Warwickshire in England, where Philip was supposed to have lived, and took photographs to share with the others. They studied the history of the period, and rounded out their impression of his personality through group discussion, even going so far as to decide on what his favourite food would have been. They engaged in collective meditations on Philip, hoping that he would somehow make contact. This continued for some time, with the group meeting at least once a week. For a whole year, nothing out of the ordinary was noted.

Then the group decided to try a new tack. They were influenced by the research of British psychologist Kenneth J. Batcheldor who believed that a light-hearted atmosphere, filled with humour and free of tension, was conducive to the production of paranormal effects. So they began to approach the sessions in this way.

Before long, Philip arrived. He made contact first with vibrations and then raps on the table. They found they could communicate with him, asking him questions, and he would respond through raps. Philip’s answers were exactly what they would have been expected to be, given the persona that had been constructed for him. Moreover, it was found that he generally could not answer questions that went beyond the boundaries of his potted biography, although he was able to sketch in some historical detail appropriate to the period.

Raps were not the only form of interaction with Philip. He was also able to dim the lights in the room and move objects around. Indeed, moving a table around became something of Philip’s personal signature. Sometimes, whenever a member of the group arrived late, Philip would move the table towards him almost like a tail-wagging dog going to greet its master. He would also sometimes use a table playfully to trap one of the group members in a corner of the room.

In their dealings with him, Philip even seemed to display emotions of his own. He refused to answer certain questions about his wife, saying they were too personal. It even seemed that his feelings could be hurt. In one session a group member told him that he could be sent away and replaced. Afterwards, Philip’s activity began to tail off.

The original goal of the experiment had been to produce a visible apparition of a ghost. In this the researchers did not succeed but, judged as a whole, the experiment would have to be considered a remarkable success.

Other Philip-like experiments have been performed since with similar results. Usually an historical persona is constructed though in one case the experiment even worked with a character from the future – Axel the spaceman!

So why not get a group of friends and try and produce your own ghost? You’ll have to be patient though. Remember - it took the Toronto group many months before the ghostly effects began to be produced.

Exploring Your Psychic Potential
Share Your Story, Join the Discussion or Seek Advice..
I wasn't sure if ghosts were real because I had never seen one before until one day me and my friend walked into a classroom and it was empty and dark we saw a girl walk into the big cupboard and decided to follow her but when we looked in the cupboard there was nothing there.
holly - 29-Apr-15 @ 9:03 AM
so I havenever thought that ghost where real but one day I was in my room and I was watching TV and my dog was laying on my bed and then her ears just shot up and she started to bark like someone was In the room with us. I heard these voices in my ear and I thought it was just the TV so I went on and then I felt a cold felling so I kind of thought it was a ghost but I was like no their is no shuch thing called ghost co I went on. then I saw a black thing run across the room. it scard me co much that I went to my mom and dads room a had to sleep with my mom and dad. now I think that mabe ghosts are real?
monkey - 28-May-13 @ 11:31 PM
Title:
(never shown)
Firstname:
(never shown)
Surname:
(never shown)
Email:
(never shown)
Nickname:
(shown)
Comment:
Validate: