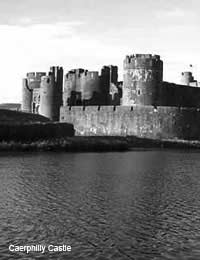 The Green Lady is a spirit native to the British Isles that has been described in many different ways. Some that have seen her describe her as beautiful and protective but others have said she is a demon that will suck your blood. Most of the more heinous descriptions are found in Highland tales. They speak of her as being covered with hair under her gown and having a goat-like body, perhaps even hooves instead of feet. This is similar to another Highland spirit, the Glaistig. These spirits are also protective, but dislike dogs and prefer to be left alone.

It is believed that the Green Lady is similar to the Irish Banshee, not quite human, but not quite a ghost either. Some think she is a human who is under a spell, while others even think she is a fairy.

Those that think she is protective describe her as a beautiful, willowy young woman with long blonde hair. Her blonde hair leads many to refer to her as a gruagach, brownie, or urisk. These are creatures of Scottish and English folklore that are very protective and considered to be “good spirits.” But, graugachs can also be mischievous and may play small practical jokes on you.

She always wears a green gown that touches the ground, hence the name Green Lady. There have been reports of her showing up dripping wet at a cottage door. She asks to come in to warm herself and dry her clothing. If she feels welcome in the home, she may stay a while and protect that particular house as well as the family that lives in it. If the family moves from the home, she stays behind to protect the next family. It is said that she is also very helpful to farmers. She has been known to protect cattle by herding them into the barn to protect them from a storm or other enemies.

The Skipness Castle by Loch Fyne has been protected by a Green Lady for centuries. She has helped prevent attacks upon the castle by using the supernatural to confuse enemies. Another castle that has its own Green Lady is the Crathes Castle near Aberdeen City. This Green Lady usually appears by the fireplace to pick up an infant ghost, and then the two simply disappear. It is said that centuries ago, the castle was renovated and beneath that very spot, the bones of both the Green Lady and the baby were found.

The castle at Caerphilly is just north of Cardiff in Wales and it too has a Green Lady. She appears as ivy that surrounds the castle, but if you appear closely, she will move a bit. If she thinks you can see her, she emerges as the Green Lady. If she feels welcome and likes you, she will extend her hand to greet you then disappear.

The Green Lady of the Stirling Castle in Central Scotland is believed to be either an attendant of Mary, Queen of Scots, or the daughter of a governor of the castle. The attendant legend says that the attendant dreamed the Queen was in danger and rushed to her bedside, only to find her bed curtains ablaze. She managed to rescue the Queen who later said she had recalled a prophecy that she would be endangered by a fire while at the castle. The governor’s daughter legend says that she was to marry an officer that was stationed there until her father accidentally killed him. Filled with grief, she threw herself off the battlement to the rocks below.

There are many reports of Green Ladies in the British Isles, many associated with castles. Whether they are the tragic ghosts or humans who have been cast under a spell, they are mostly benevolent spirits that tend to look out for those in the castles or homes.

The Ghosts of Famous Britons
Share Your Story, Join the Discussion or Seek Advice..
[Add a Comment]
I saw the green lady in the little tower with the square top looking down on me and my family. It scared me like mad.
annie - 21-Aug-16 @ 6:54 PM
My family and I lived in property called'Gladstone villa' in the former mining town of Bargoed which is in the Caerphilly county borough of the South Wales valleys during the 1960's and 70's. We experienced things that defied rational explanation and we had no choice but to draw to the conclusion that the place was indeed haunted.We would hear footsteps in the main bedroom every evening when we would all be down stairs watching Television and one of us would turn the sound down to hear it more clearly. We also had some poltergeist activity but nobody was harmed.There was also the occasional sighting. One day my mother and I were in the front room when she when she just happened to go to the settee to get something, she looked to her left to the door way that led to the hall and I can still see the look of confusion on her face, like she saw some one she didn't know or shouldn't be there. I didn't see it as I was behind the door that was open and it blocked the doorway but she later told me that she saw the face of an old man.We also had a visit from a priest and a medium, the priest blessed Gladstone villa and it was quiet for a while. The medium went into a trance at some point to try and make contact, he failed to get a name but he later confirmed that there was a presence there and it was an earthbound spirit.We left Gladstone villa in June 1978.My mother and I still remember it and we wouldn't want to go through this again.
Dex - 25-Feb-16 @ 9:06 PM
Sounds just like the blair witch.
lindsay - 12-Sep-12 @ 9:58 PM
when i was little i use to play in Rosewellgraveyard and i think i hered some said to me watch out fror the green lady and sine then i havent been in rosewell graveyard.......
chunk - 10-Sep-12 @ 4:58 PM
Title:
(never shown)
Firstname:
(never shown)
Surname:
(never shown)
Email:
(never shown)
Nickname:
(shown)
Comment:
Validate: