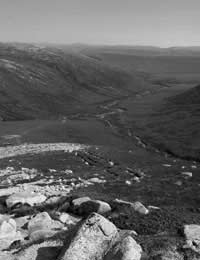 Descriptions of the Feat Liath portray him as a very tall figure, perhaps ten feet or taller, covered in short hair. Many have compared him to Bigfoot, Sasquatch, or the Yeti. There have been several sightings of the Fear Liath by climbers and also a few photographs of footprints left behind by the creature.

There have been reports of large, hairy creatures roaming the British Isles since the 13th century. Often the creature was referred to as Wudewas or “Wood Men.” But, it was in 1925 that the story of the Fear Liath was first told. John Norman Collie was a much-respected scientist, climber, and explorer who had a frightening experience while alone near the summit of the Ben MacDhui, but did not tell anyone for about 35 years. He finally decided to recount his experience with the creature at the 1925 Annual General Meeting of the Cairngorm Club.

When he finally did tell the story, it was terrifying. "I began to think I heard something else than merely the noise of my own footsteps. For every few steps I took I heard a crunch, and then another crunch as if someone was walking after me but taking steps three or four times the length of my own." Collie went on to say as the crunching sound continued, he was “seized with terror and took to my heels, staggering blindly among the boulders for four or five miles” until he reach the Rothiemurchus Forest.

While Collie did not actually see the Fear Liath, he was so spooked by the experience that he resolved never to return to the Ben MacDhui alone, convinced there was a creature on the mountain.

Collie was not the only climber to report this experience. After he told his story, he received a correspondence from Dr. A. M. Kellas. This letter told Collie that Dr. Kellas and his brother Henry were close to the summit when they saw a giant figure approaching. It disappeared in a dip, but scared the men enough that they left before seeing if it would reappear or not.

Many other climbers described the same unshakable feeling of fear and panic that Collie and Kellas felt. Like Kellas, some actually reported seeing a large figure. Many say they have an overwhelming feeling of negative energy around them. Some have even reported the Feat Liath speaking in an incomprehensible voice that vaguely resembles the Gaelic language.

This experience is similar to those reported by people who have encountered Sasquatch or Bigfoot, but there may be some explanations. Those feeling they saw the Fear Liath may actually have been seeing an optical illusion known as the Brocken spectre. This can occur on misty mountainsides and appears as a large magnified shadow. It is caused by the sun shining from behind a climber that is looking down a ridge into the mist. The light projects up through this mist and creates the shadow effect that is often triangular in shape, making it look human in form.

While some may discount the Fear Liath as an optical illusion that spooks climbers of the Ben MacDhui, many out there attest that there is a strange presence on the mountain that simply cannot be explained.

The Ghosts of Famous Britons
Share Your Story, Join the Discussion or Seek Advice..
I lived at 11 Winslow rd in Bradford and apparently it was haunted.strange things going on .doors slamming .lights turning on and off.we even had a tree growing through the kitchen floor.but found out the houses where built over a graveyard. Anything from the 80's.anyone got history I be grateful
caz - 13-Oct-14 @ 3:01 PM
Title:
(never shown)
Firstname:
(never shown)
Surname:
(never shown)
Email:
(never shown)
Nickname:
(shown)
Comment:
Validate: