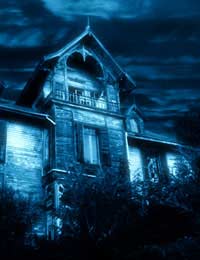 The Bell Witch is perhaps Tennessee’s best-known ghost story. The story of the Bell Witch was used in the movie An American Haunting and it is believed that the Blair Witch Project was based as least in part, on the tale of the Bell Witch. The Bell Witch events occurred in Adams, Tennessee primarily between 1817 and 1821, although people still report strange phenomena in that area.

In the early 1800s, a man named John Bell moved his family from North Carolina to a section of Robertson County, Tennessee, which later became known as Adams. He bought land and a home for his family. The family was well liked within the community, but trouble beset them in 1817. It began simply enough. One day, John Bell saw a strange creature on his land that had the head of a rabbit, but the body of a dog. John shot at the strange creature, but missed. That night, he went home and the family heard a beating sound on the side of the house. They rushed outside only to find no one there. As the days went on, the beating sounds continued, but other odd things occurred as well. Things in the house started to move on their own and the children complained of rats chewing on their bedposts and of their covers being pulled over their heads.

Then the voice started. It started out low and unintelligible at first, but grew stronger. The entity had a female voice, yet she remained invisible to the human eye. As the years went on, it was said that she shook hands with people and even held conversations, sang hymns, and quoted scripture. Yet no one in the area knew who this could be or why she chose to torment the Bell family.

Bell’s youngest daughter Betsy began to be physically slapped by the entity she could not see. After that, Bell decided to tell neighbour James Johnston of the strange happenings. Johnston and his wife stayed in the house and experienced the same events. It was only when Johnston cried out “I ask you in the name of the Lord God, who are you and what do you want?” that the entity quieted down.

The story first appeared in the Godspeed History of Tennessee in 1887. Richard Williams Bell, John Bell’s second youngest son, wrote “Richard Williams Bell’s Diary: Our Family Trouble,” which was quoted in the Red Book article titled “An Authenticated History of the Bell Witch of Tennessee” in 1894. In his diary, Richard claimed that General Andrew Jackson (who would later become president of the United States), whom both John Jr. and Jesse Bell had fought under at the Battle of New Orleans, had himself stayed at the home and witnessed strange phenomenon. Legend has it that it was even Jackson who labelled the entity a witch.

For many years, John Bell had the symptoms of a nervous system disorder, which cause seizures. At times, he could not speak because his face became paralysed. Some now believe he perhaps suffered from Bell’s Palsy (coincidentally named after Charles Bell, who discovered it after John died).

John Bell died the morning of December 20, 1820. The family found a vial of liquid next to him that he had drank the night before his death. When the liquid was given to the family cat, it died almost instantly. It was then that the Bell Witch spoke, saying, “I gave Ol’ Jack a big dose of that last night, and that fixed him.” The Bell Witch was even heard laughing at John’s funeral and sang a cheerful song.

In spring 1821, the witch visited John’s widow Lucy and told her that it would return in seven years for another visit. It visited John Bell, Jr. in 1828, telling him of certain predictions such as the Civil War and the Great Depression. The witch left after three weeks, telling John Jr. that it would visit his descendents in 107 years. In 1935, John Jr.’s closest direct living relative was Charles Bailey Bell, a Nashville physician. He did write a book titled Bell Witch, but that was prior to 1935, which would have been 107 years.

Today, several people who visit Bell’s property say that they hear people talking and children playing. It is also said that it is very hard to take a good picture on the property.