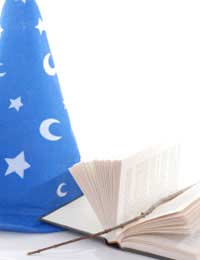 Merlin is a familiar figure to us all now. Bearded grey, wearing a pointy hat with stars and half-moons emblazoned on it, he has been seen in countless cinematic representations and embodies our very idea of what a “wizard” ought to be.

In his books on Arthurian legend, it was the 12th century Welsh writer Geoffrey of Monmouth who launched the character of Merlin on its glorious career. Monmouth also penned a book entitled “The Prophecies of Merlin.” But did Monmouth invent the character and his prophecies out of whole cloth, or did they have real roots in Welsh history and literature? Are the prophecies nothing more than a historical literary curio, or do they still have relevance for us today?

Merlin in Myth and in History

Scholars tend to take the view that Monmouth’s Merlin is a blend of Aurelius Ambrosius, a real British king who lived in the early 5th century A.D., and Myrddin (the “dd” pronounced “th”), a figure who appears in early Welsh literature, portrayed as a mysterious madman who supposedly lost his wits after his friends were killed in an epic battle in Strathclyde, and went to live in the wilds of the Caledonian Forest. There his visionary gifts found expression in an outpouring of poetic prophecy. Early Welsh literature is strewn with references to Merlin, portrayed as this “mad bard,” and with the predictions attributed to him. Geoffrey of Monmouth absorbed these traditional Welsh texts and brought them to a much wider audience by recasting them in Latin.

Merlin’s Prophecies, in the form of Geoffrey of Monmouth’s presentation of them, were taken seriously for hundreds of years during the Middle Ages. They were regarded much as the prophecies of Nostradamus are in our own day – something that would be constantly consulted whenever dramatic events occurred by people looking to interpret their own experience in the light of prophecy. Few today pay them this kind of regard. There are still some who do, however, believing that Merlin’s work embodies a genuine prophetic vision and that events from our own day are correctly predicted in it. The most notable of these Merlin acolytes is R. J. Stewart, a man deeply immersed in the culture and history of the early Celts. Stewart has written a number of books, interpreting the prophecies of Merlin in light of our current historical knowledge.

Stewart believes these words foretell the uniting of the kingdoms of Scotland and England in the person of James VI (King of Scotland, who became James I of England).

The sixth shall overturn the walls of Ireland and change the woods into a plain. He shall reduce several parts to one and be crowned with the head of a lion. His beginning shall lay open to wandering affection, but his end shall carry him up to the blessed, who are above. For he shall restore the seats of saints in their countries, and settle pastors in convenient places. Two cities he shall invest with two palls and shall bestow virgin-presents upon virgins.

British military intervention continued in Ireland during James’ reign. He united the crowns of England and Scotland in his own person, becoming the first “British” monarch. The phrase “His beginning shall lay open to wandering affection” may refer to James’ troubled youth in Scotland, much of which he spent as a prisoner of various factions who were able to take a hold of him. Settling “pastors in convenient places” and bestowing “virgin presents upon virgins” may refer to the colony of Virginia being settled by religious Dissenters.

The Prophecies of Merlin - The 20th Century and Beyond

Stewart believes this verse foretells the rise of Hitler and his persecution of the Jews.

“There shall succeed the ass of wickedness, swift against the goldsmiths; but slow against the ravenousness of wolves.”

“The baths of Badon shall grow cold and their salubrious waters engender death.”

Stewart claims this prophecy was fulfilled in the 1970s when a girl caught an infection and died while bathing in the hot springs of Bath.

The conclusion of Merlin’s Prophecies recalls the Book of Revelations in its apocalyptic vision and seems to open itself to astrological interpretation.

"The tail of Scorpio shall produce lightning and Cancer quarrel with the Sun. Virgo shall mount upon the back of Sagittarius and darken her virgin flowers. The chariot of the Moon shall disorder the zodiac and the Pleiades break forth into weeping. No offices of Janus shall hereafter return, but his gate being shut shall lie hid in the chinks of Ariadne. The seas shall rise up in the twinkling of an eye and the dust of the ancients shall be restored. The winds shall fight together with a dreadful blast and their sound shall reach the stars. "

Stewart suggests that these words refer to cataclysmic weather conditions and that the vision will culminate in the 21st century. Disturbingly, this chimes perfectly with the predictions of some scientists on the effects of global warming.

English translations of Monmouth’s Prophecies of Merlin can be found readily on the internet. So why not have a look and decide for yourself whether the ancient wizard still has a message for our own day?

Mother Shipton: Prophet of Yorkshire
Share Your Story, Join the Discussion or Seek Advice..
Years of research solidified to me that Merlin was much more than a mythical mystic. I wrote the Merlin Prophecy and although it falls under the genre of fantasy, I believe that it carries more fact than fiction. I also added a possible scenario that he was the founder of the Knights Templar...at least I like to believe it! Thanks for helping to keep his memory alive, Jeff
MrEdude - 23-Aug-18 @ 4:22 PM
Title:
(never shown)
Firstname:
(never shown)
Surname:
(never shown)
Email:
(never shown)
Nickname:
(shown)
Comment:
Validate: