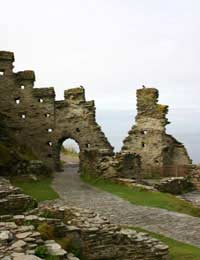 The most obvious question in relation to King Arthur is whether or not he existed at all. Historians continue to debate this topic fiercely and there is no general consensus on the point. There are precious few references to Arthur in documents from the time in which he is believed to have lived or even in the centuries afterwards. There is a reference to King Arthur in the Annales Cambriae which describes him triumphing against the Saxons at the battle of Badon in 516 A.D. It is not clear exactly when the Annales Cambriae was written however, and some scholars believe the reference to Arthur was not contemporaneous but may have been inserted some time (possibly hundreds of years) afterwards. Another reference to Arthur occurs in the Historia Brittonum which describes twelve battles in which Arthur prevailed. The Historia Brittonum was not written until 830, however, and the work is known to blend history and myth together shamelessly so it cannot be regarded as solid proof of Arthur’s existence.

References to Arthur are also found in Welsh bardic literature. In this he is portrayed as a mythical figure, who wields magic swords and does battle against werewolves and other fabulous creatures.

Some scholars believe that the deeds of the British King Ambrosius Aurelianus formed the historical basis for the Arthur story. According to Gildas’s De Exciddio Britanniae, it was indeed Ambrosius who prevailed at the battle of Badon, providing a substantive link with the references to Arthur elsewhere.

It is possible that the Arthurian canon, as we have it today, emerged from the grafting of the real history of Ambrosius Aurelianus doing battle with the Saxons onto the traditions of Welsh mythology.

The breakthrough moment for the legend of Arthur came with the publication of Geoffrey of Monmouth’s History of the Kings of Britain in the 11th century. Geoffrey was Welsh and had absorbed the stories of Arthur from Welsh literature. His own work was written Latin, so he was able to disseminate the legend to a broader European audience. The story of Arthur proved a hit on the continent and during the Middle Ages underwent much elaboration at the hands of French poets such as Chrétien de Troyes.

Before the modern period, the last definitive statement of the Arthurian mythos came with Thomas Malory’s Le Morte D’Arthur in 1470, written while its author was in prison! It is Malory’s version of the tale which formed the basis for Tennyson’s treatment of it in the late nineteenth century, and T.H. White’s series of novels, The Once and Future King, which appeared in the mid 20th century and have largely shaped the modern cinematic interpretations of the story.

The Return of the King

One of the most intriguing aspects of Arthurian legend is the notion that the King will one day return and reign again. The Welsh tales of Arthur mentioned that his grave could not be found. Geoffrey of Monmouth does not describe Arthur’s death. He says only that he was mortally wounded in battle with his son Mordred, then sailed away to the mystical island of Avalon to be cured of his wounds. Thomas Malory, in Le Morte D’Arthur, follows in the Monmouth tradition though he also describes a tombstone, believed to be that of Arthur, on which the following inscription appears : “Hic jacet Arthurus, Rex quondam, Rexque futurus." Translated into English, this means “Here lies Arthur, former king, and future king.” This gave rise to the notion that Arthur will one day return in Britain’s hour of need, making him The Once and Future King.