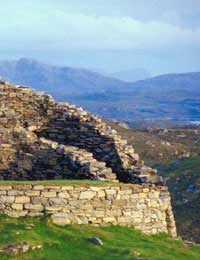 One of Britain’s most successful prophets is remarkably little known: Kenneth Mackenzie (Coinneach Odhar in Gaelic) also known as the Brahan Seer or the Highland Seer, was born on the Scottish island of Lewis in the 17th century. Although he may have been born with the gift of Sight, legend has it that he was given a magic stone by the ghost of a Danish princess in return for helping her return to her grave in peace. By looking through this ring-like stone, Odhar was able to see into the future.

As a peasant bondsman, Odhar worked hard as a labourer until his talents were recognised by the local lord and he was allowed to retire from the life of toil. He became a respected counsellor who travelled the Highlands and Islands of Scotland, visiting the castles of the local lairds.

Odhar’s predictions have a characteristically gloomy cast. This may have been because they tended to focus on his local area and, in the centuries following Odhar’s death, the Highlands were to experience much tumult and tribulation.

In these words, Odhar foresaw the battle of Culloden, in which so many highlanders were killed:

Oh Drummossie! Thy bleak moor shall, before many generations have passed away, be stained with the best blood in the Highlands. Glad am I that I will not see that day, for it will be a fearful time.

Of his own people, Odhar said the following:

The people will degenerate as their country improves and the clans will become so effeminate as to flee from their native country before an army of sheep.

This sentence is believed to predict the Highland Clearances of the 19th century which saw large areas of the Highlands depopulated to make way for sheep farms.

In his own lifetime, many of Odhar’s predictions seemed utterly absurd; yet they have since been fulfilled. He is said to have predicted, for example, that ships would one day sail through the hills of Inverness. Contemporaries scoffed, but hundreds of years later the Great Caledonian Canal was constructed and ships did indeed sail through the Inverness hills, exactly as Odhar had foretold.

Odhar is said to have predicted that Scotland would once again enjoy its own parliament, but not until it was possible for a person to walk dry-shod from England to France. In 1994, the Channel Tunnel was constructed and in 1999 Scotland regained its own parliament.

Death of the Prophet

Ultimately, Odhar’s prophetic gifts were to be his undoing. Legend has it that the Countess of Seaforth, concerned about her husband who had been on a diplomatic mission to Paris, commanded Odhar to use his gift of Sight to see what had become of her husband. Somewhat tactlessly, Odhar blurted out that her husband was fine and at present enjoying the company of an attractive woman in a luxurious French boudoir. Infuriated, the Countess ordered Odhar to be confined and later tried as a witch. He was, of course, convicted and sentenced to be burned to death. In his final moments he prophesied that the Seaforth family would, before long, lose possession of their lands and be utterly extirpated. That prediction, too, came true.

It is difficult to say how much truth there is in the legend of Coinneach Odhar. Virtually no contemporary record of him exists. Instead, the accounts of his life and predictions that we have today were put together in the nineteenth century by authors who visited the Highlands and gathered oral testimony from the people who lived there. Of course, in this society it was customary for history to be transmitted orally so there is nothing unduly alarming in this; it does mean, however, that it is hard to objectively verify the time-honoured tales.

A document does exist, referring to a Coinneach Odhar, but in the 16th not the 17th century. He was described as a “principal enchanter” and was executed for the crime of witchcraft. Some say this was the famous prophet and that the oral tradition must have got the centuries mixed up; others say this was the prophet’s grandfather.

There is much that is compelling in the story of Coinneach Odhar. Certainly, his predictions, as they have come down to us, have a remarkable specificity – one that is often lacking in so many of his fellow prophets. Stories are still told of him in the Gaelic-speaking areas of Scotland, and people still live in fear of some his predictions coming true.