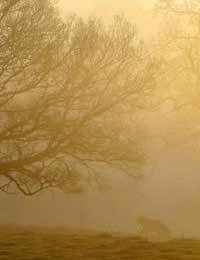 The Beast of Exmoor is a cryptozoological cat. That is it is a cat that people have reported seeing, but there is no scientific evidence to back up its existence. There has been numerous eyewitnesses report seeing this cat in the fields of Devon and Somerset in the United Kingdom. The animal is known to kill livestock, but there have been no reported attacks on humans.

The first reported sighting of the Beast of Exmoor was in the 1970s. But, it was in 1983 that the most famous sighting was reported. Eric Ley said that several hundred of his sheep were violently killed, their throats slashed, over a three month period at his farm in South Molton. The Daily Express reported this story and offered a reward for the capture of the Beast, but no one ever came forward to collect the reward.

Descriptions of the Beast of Exmoor vary a bit, but most say it is a large cat, resembling either a puma or a panther. It is usually described as either being black, dark grey, or tan in colour. The animal is between four and eight feet long. It stands very close to the ground and can effortlessly leap over fences that are six foot tall. Because the descriptions do vary, some cryptozoologists believe there may be more than one animal involved. What is known is that there is no cat meeting this description that is native to England.

There are at least two known photos of the Beast of Exmoor that exist. The photos show an animal that indeed resembles a puma or panther. However, sceptics say that there are no other objects in the frame of the photo to help distinguish the size of the Beast, leading them to believe it could just be photos of domestic cats. Also, some say the second photo resembles a dog more so than a cat. Of course, with digital photography and the many programs that can alter photos, changes can easily be made to deceive people.

What are the possible explanations for the Beast of Exmoor? Some think that the Beast is actually a large dog, misidentified as a cat. Some believe that perhaps the Beast is actually an escaped exotic animal as keeping exotic animals was a fad in the 70s. In 1976, the government issued a Dangerous Wild Animals Act, which controlled the keeping of wild animals, including large cats. This caused many people to release cats they had privately owned. Still, others think the animal may be a hybrid known as a Pumapard, an animal bred by Carl Hagenbeck. However, the males are always sterile, which would prevent them from breeding and creating more Beasts.

While the Ministry of Agriculture continues to investigate reports, the most recent made in 2001, it believes the Beast to be a hoax or a myth and that the sightings are just misidentifications of animals native to the Exmoor area.

Loch Ness Monster
Share Your Story, Join the Discussion or Seek Advice..
Evidence has been found on Exmoor of a big cat its tracks were found and a sample of its fur was left on a wire fence. The fur was sent abroad to a big cat expert and the dna matched that of a leopard.
Dog - 29-Jun-13 @ 12:39 AM
Title:
(never shown)
Firstname:
(never shown)
Surname:
(never shown)
Email:
(never shown)
Nickname:
(shown)
Comment:
Validate: