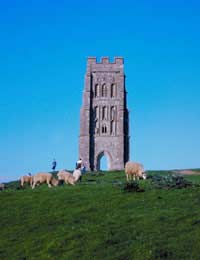 The concept of ley lines was first introduced by Alfred Watkins in his books Early British Trackways and The Old Straight Track. He noted that many ancient monuments, churches and landmarks were aligned with one other on straight lines. Watkins speculated these lines may have marked the course taken by ancient trade routes, perhaps with paths or walkways which had since decayed and disappeared from sight. It struck him as curious, however, that the lines seemed to ignore natural impediments such as mountains or rivers. It was if the ancients had felt some compelling need to maintain these alignments regardless of the practical difficulties of doing so.

Watkins founded The Old Straight Track Club, an association of those who were interested in following his research into ley lines.

In 1936, the writer Dion Fortune published a novel which featured ley lines as conduits for some mysterious earth energy. Later, in 1958 the French writer Aime Michel published a book in which he conflated the ley line concept with “orthotenies” – the notion that French UFO sightings were concentrated along straight lines. In the midst of the 1960s counterculture, these two notions merged with one another and a belief in the mystical association of ley lines began to gather momentum.

Some believed that ley lines represented hidden earth energies and that ancient peoples, with knowledge that has since been lost to us, by siting their constructions in specific places, were somehow able to tap into this hidden power. Practitioners of the mysterious art of dowsing claimed to be able to detect ley lines using their dowsing rods, which would twitch in response to the ley line’s presence.

Ley-hunting became a popular pastime in Britain in the 1960s and 70s. As Alfred Watkins had observed in his writings, many ordnance survey maps gave only a very incomplete picture of ancient constructions such as barrows and megaliths so there was great scope for personal initiative in researching local ley lines. Many ley-hunting clubs were formed and the Ley Hunters Journal acted as a focal point for national endeavours.

Today many investigators into the paranormal believe that strange occurrences – such as UFO sightings or ghostly manifestations – happen with unusual frequency in the vicinity of ley lines. Some have even claimed that alien spacecraft may be able to tap into the energies of ley lines and travel along them as a train travels along the railway tracks.

Although much of the research into ley lines has been conducted in Britain, similar phenomena have also been noted in other countries, particularly in the Americas, where the original inhabitants of the continent also seemed to display a curious obsession with straight lines.

Sceptics argue that the whole notion of ley lines is bogus – either as mystical energy fields or as old-fashioned straight-line alignments of construction sites. They claim that many of the sites supposedly aligned, date from different periods and were sometimes built by different peoples; therefore there can never have been any deliberate intention to create an alignment for some hidden purpose. Furthermore, they insist that many sites which enthusiasts claim as part of a ley formation do not, in fact, form perfect straight lines at all but are slightly off in many cases; and that, with a large enough database of sites, it is relatively easy to take a ruler and find straight line alignments between a few of them. Ley line supporters dispute this, and argue that, in many cases, dating the constructions is irrelevant because, as successive peoples dominated the landscape, they often chose to build on the same sites as their predecessors, just as Christian churches were once sited on pagan holy ground.

Interest in ley lines represents one of the more peculiarly British strains of paranormal research. Although the enthusiasm of the 60s and 70s appears to have waned a little, there are still researchers out there, studying maps and using dowsing rods in an attempt to discover new formations.

Whaley House
Share Your Story, Join the Discussion or Seek Advice..
I have had weird things going on in my house in Bredbury Stockport and lots of orbs .was wondering in ley lines run under my house
Mum - 27-Jul-19 @ 11:58 PM
I am convinced there is something strange happening at a place called Stockport in Cheshire, it's about 8 mile from the city of Manchester. The river Mersey begins here at watersmeet of the Tame & Goyt valley's. I was amazed to learn how many young people have died in certain parts of Stockport along side this river, from Gorsey Bank down stream to an area called Burnage at the flood defence has reported many strange things since to my knowledge the 1940s. Its a very old crossing point and ancient trade port for the isles, especially taking into consideration the Anglo Saxon shipping route prior to canals (inc ship canals like the river weaver or MSC) gave much food and fertile growing areas for pasture and the advantage of Manchester(inc pre-manchuria) markets of old.
Brutus - 13-Dec-18 @ 11:16 PM
I live in a newly built property there is just two properties I checked for ley lines when my neighbour & I were playing Crib a cut of the cards is done throughout the game and 14 of those cuts produced a jack of hearts it transpired that three ley lines cross over us, I have now discovered an image that looks like a wolf on my fence this fence is the adjoining fence to our two properties my surname comes from St Buryan I believe I am of druid descent a feeling I have had since I was a child I wonder if anyone out there can tell me for certain if this is all something druid related or is it just my wishful thinking
Madmidge - 16-Mar-17 @ 1:21 PM
Title:
(never shown)
Firstname:
(never shown)
Surname:
(never shown)
Email:
(never shown)
Nickname:
(shown)
Comment:
Validate: