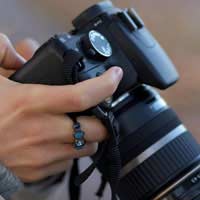 Ghosts have intrigued us for centuries. Even in the modern age of science and technology, our fascination with them has not diminished. Yet proof of their existence remains tantalisingly elusive. Our visual sense is undoubtedly our most important and definitive proof, if it ever comes, will most likely have to include at least a visual record of an “encounter.” Photography has existed for almost two centuries now and colour photography has been around for one century, yet there are still very few images which appear clearly to show a ghost. The Brown Lady of Raynham Hall is one; the Tulip staircase photo, which shows a robed figure ascending some stairs, is another.

Ghost photography has always been dogged by accusation of fraud, however, and nothing likely to win over convinced sceptics has yet appeared. But don’t let that deter you. With the advent of cheap digital cameras and even camera-capable mobile phones, the number of people equipped to make a visual record of the things they see as they go about their day-to-day business has now greatly increased, so maybe that perfect ghost image will arrive before long!

One of the great controversies in the field of paranormal research centres on photographs of the mysterious light phenomena known as orbs. There are spheres of light, usually translucent, which appear frequently in photographs taken by ghost-hunters. They tend not to be seen by the naked eye, but do show up later in the photographic image. Believers insist that the orbs are actual spirits, ghosts if you will, representations of the “soul essence” of a person. Sceptics dismiss these claims, and state that they are nothing but photographic anomalies caused either by defects in the camera or by light reflected back to the camera from particles of dust, droplets of rain, reflective surfaces, or unnoticed light sources.

Believers refute this. They can emotionally describe instances in which they took photographs of a specific location in which no orbs appeared; then, following some indication of paranormal activity - such as a sound, a rapid drop in temperature, or an unusual EMF meter reading – they took more photographs in which the orbs suddenly manifested themselves. They are convinced that the orbs have some paranormal significance. Some stake out a middle ground and insist that, while most orbs are no more than photographic artefacts, some are real.

The controversy continues and you will have to make up your own mind on this one – perhaps after taking some orb photographs of your own.

Ghost hunters tend to differ in their appreciation of digital cameras. Many value them for the cheapness and convenience they offer. Others tend to be more wary. They insist that digital cameras lack the precise image quality of the more conventional kind, are more prone to picture anomalies, and, perhaps most importantly, lack the stamp of authenticity that a photographic negative provides, meaning that even if something extraordinary was captured on camera, critics could claim it had all been done up in Photoshop. Of course, you may not care about this. Maybe you take photographs for your own satisfaction only. But if you do care, modern digital cameras can now provide something like the digital equivalent of a negative – EXIF data. This data is embedded in the photograph when it is taken, and, among other things, it can provide a guarantee that the image has been preserved in its original form.

Many researchers take both a digital and conventional camera with them on ghost hunts, snapping away madly with the digital camera, to capture all the details of the scene, and keeping the other camera for those more promising moments when they feel that a ghost may be near.

Some truly dedicated ghost-hunters like to use infra-red film while trying to take pictures of ghosts, believing that it can capture images of some spirit entities which conventional cameras cannot. Infra-red photography involves a great deal of painstaking care and is not for the faint-hearted. The roll of film must be preserved in a fridge before use, then taken out shortly before the ghost-hunting session begins to allow it to thaw out. It must also be inserted and removed from the camera in pitch darkness. If you’re a beginner in the photographic field, perhaps it’s best to steer clear.

Finally, here are a few tips which should help you capture that elusive perfect ghost image :-
Next Page

How to Create Your Own Ghost
Share Your Story, Join the Discussion or Seek Advice..
I have seen a ghost before but it would be good to photo graph it to prove to my dad that ghosts and magic is real and that it is not just in movies.
holly - 29-Apr-15 @ 9:05 AM
Title:
(never shown)
Firstname:
(never shown)
Surname:
(never shown)
Email:
(never shown)
Nickname:
(shown)
Comment:
Validate: