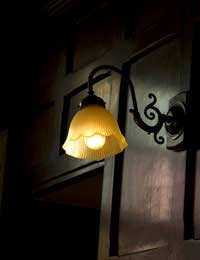 All-night vigils in haunted buildings are all very well. But wouldn’t it be great if you didn’t have to wait cold and bored while hoping to see a ghost? Wouldn’t it be nice if you could have a bite to eat socialise with friends, maybe even quaff some cold beer while waiting for the spooks to appear? Well, you can. Just visit a haunted pub. Britain has many of them. Here is our Top Ten.

The Grenadier pub in London’s Belgravia was once the favourite haunt of soldiers from the Duke of Wellington’s regiment. It is decorated with military paraphernalia, mostly from the old Imperial days, and is allegedly haunted by the ghost of one unfortunate grenadier. The story runs that he was playing guards with his fellows and was caught cheating. Outraged, they beat him up and threw him down the pub stairwell. The poor chap died and is said to haunt the pub to this day.

If you like being jostled out of your seat or having your pocket picked you might enjoy a visit to the Golden Fleece pub in York. A ghostly pickpocket and a phantom curmudgeon who sometimes gets upset whenever a customer sits in what used to be his favourite seat are among the spectral regulars in this establishment. But they’re not alone. There are quite a few others, including a ghostly dog that tugs at punters’ trouser legs.

With its stone circles and ancient monuments of all kinds, Wiltshire has long been a centre of paranormal activity, ranging from ghost sightings to UFO reports. Some believe this relates to the large number of ley lines found in the county. The Red Lion pub in Avebury is said to lie at the intersection of two ley lines, and is actually located inside a stone circle. It is also well known for its spooky visitations - including the ghost of a woman called Florrie who was murdered by her soldier husband in the 17th century after he discovered that she had been unfaithful to him while he was away at war.

The Kings Arms in Monkton Farleigh has an array of ghosts almost as extensive as its many tempting menu options. Among the highlights (of the ghosts, not the menu) are a monk who reportedly died in the pub in mysterious circumstances; and a woman whose runaway carriage crashed into the building, killing her. There is also a mysterious key which was unearthed during recent building work on the site. Allegedly two ghosts appeared and warned the bar staff not to knock down the wall behind which the key was eventually found. The purpose of the key is still not known but it now hangs proudly on the pub wall.

The St. Anne’s Castle in Great Leighs, Essex boasts of being the oldest public house in England. It’s also home to quite a few ghosts according to the teams of ghost hunters who have set up vigils here. Most intriguing is that of a woman who was burned to death as a witch in the early 17th century. A spooky black cat has also been spotted. Perhaps it’s the witch’s familiar.

The Skirrid Inn close to Abergavenny is the oldest pub in Wales. It has a rather macabre history, having being used as a place of execution in the medieval period. Yes, you can quaff beer in the spot where criminals once swung from the rafters. And if you keep your eyes open, you may even spot one or two of them still hanging around, if you’ll excuse the pun. The pub has a rich history of haunting and has been pronounced the most haunted pub in Britain by famed ghost hunter Richard Jones.

The Devil’s Stone Inn in Shebbear gets its eerie name from the mysterious giant boulder which sits at the centre of the town. No one knows where it came from and legend has it that it was dropped by the Devil himself as he was flying overhead. The Inn has a spooky reputation too, and is allegedly haunted by quite a few ghosts. Most of these seem to have a fairly pleasant disposition, according to the ghost hunters and psychics who have visited the premises, other than a single curmudgeon who was believed to be a rent collector in life.

The Ship Inn pub in Sandgate, Kent is said to be haunted by a spirit known as The Fish Lady. This fussy ghost, who has occasionally been seen dressed in Victorian-era clothes, has been known to pester customers she doesn’t care for. It is believed she is a former owner of the pub.

The Seven Stars pub in Robertsbridge, Sussex has a history dating back to the Middle Ages. Charles II is even said to have been confined there for a time. Over the years, both customers and employees have reported quite a number of spooky experiences – phantom footsteps, shadowy apparitions, and dogs reacting to the presence of something unseen.

Marsden Grotto in South Shields has a spectacular location and a fascinating history.Actually located in a cliff-face overlooking the sea, the grotto was built, or rather blasted, by a character known as Jack the Blaster, who used explosive to carve a home for himself out of the raw stone. Thanks to Jack’s legendary hospitality, what was originally a private residence soon transformed into an inn which became a favourite with the local smugglers.

With such a shady history, you might expect a ghost or two to be hanging around, and you wouldn’t be disappointed. Psychics have claimed to detect a high level of paranormal activity in the building, and a television crew who filmed a documentary there started as sceptics but came away perturbed at the strange goings-on. The spirit of one unfortunate is believed to be that of a smuggler who informed on his fellows and was brutalised by them after being caught.

Haunted London
Share Your Story, Join the Discussion or Seek Advice..
Why is the schooner inn, alnmouth (northumberland) it has been proved to be the most haunted pub in the uk
Poo - 6-Aug-14 @ 9:52 AM
We are the proprietors of The Star Inn, Edenbridge, Kent. I have heard of previous reports of sightings at the property but this was way before our time here and we don't have any details - quite frankly I am a complete sceptic, but .... We have a long term resident staying with us and he purports to have seen a particular figure on 2 separate occasions in the past few weeks. My scepticism remains but our resident is wholly convinced of what he saw, even to the point of calling out to the figure on one occasion. Any advice on what I can do to check on this supposed phenomenon ?
John - 6-Nov-12 @ 9:47 AM
Title:
(never shown)
Firstname:
(never shown)
Surname:
(never shown)
Email:
(never shown)
Nickname:
(shown)
Comment:
Validate: