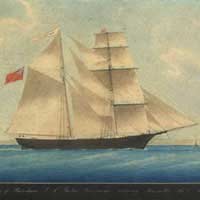 The Mary Celeste had been built in Canada and was registered in New York. Its captain Benjamin Briggs was an American, and its crew was mostly Dutch. Briggs was part-owner of the vessel and his wife, Sarah, and their two-year old daughter, Sophia Matilda, accompanied him on the voyage.

The ship departed New York on November 7th 1872, carrying a cargo of pure alcohol to Genoa in Italy. Approximately one month later, the Mary Celeste was found adrift, close to the Azores islands, by a British ship called Dei Gratia. After hailing the Mary Celeste for two hours and receiving no reply, some crew members of the Dei Gratia boarded the other ship. They found it completely abandoned. There was no sign of life. Nor were any corpses or signs of a great struggle to be seen. The cargo of alcohol was still present although a few barrels were empty. Some of the ship’s instruments were missing. The captain’s log book was found. Its last entry had been made almost ten days before, indicating no problems.

Water sloshed around the abandoned ship but it was still seaworthy. Some of the Dei Gratia crew manned the Mary Celeste and sailed it to Gibraltar where an inquiry was held into what had occurred. It was here that the first wild speculations about the incident were aired.

Frederick Solly Flood, who acted as advocate general in the British admiralty court, explored various dark possibilities in the course of the proceedings. He hinted that the crew might have mutinied, perhaps soused on some of the alcohol that the ship was carrying. This seemed unlikely, however, as the alcohol was not of a suitable quality for drinking. He also speculated that perhaps the whole thing was nothing but an insurance scam, with Briggs being in on it. Later, he mused that the Dei Gratia crew members may have attacked the Mary Celeste and murdered its crew members so that they could claim the prize money associated with finding an abandoned vessel. In the end, though, all of these theories were rejected. The Court concluded by praising the Dei Gratia crew members and speculated that the Mary Celeste crew had perhaps abandoned the ship in the mistaken belief that it was about to sink.

Solly Flood’s accusations had attracted some interested to the case at the time but it was only some years later that the legend really began with the publication of the short story “J. Habakuk Jephson’s Statement” by Sir Arthur Conan Doyle, better known as the author of the Sherlock Holmes stories. Conan Doyle’s story was based upon the Mary Celeste incident but he embellished it significantly and changed the name to Marie Céleste. In the fictional account, the ship was found abandoned with half-eaten breakfasts on the table and cups of tea which were still warm. This, of course, raises the mystery factor significantly. Fact and fiction became inextricably intertwined and the legend of the “ghost ship” was born.

Mary Celeste – Theories about what Happened

The mystery of what happened to the Mary Celeste has continued to intrigue us. Many theories have been offered over the years in an attempt to explain it. The ship is often mentioned as one of the victims of the notorious Bermuda Triangle but, in fact, it sailed some distance from that area.

The most compelling explanation offered is that something untoward occurred in the volatile cargo of crude alcohol which the ship was carrying. Perhaps part of it became unstable in the high temperatures and either exploded or began to give off effusions. The captain may have been unduly alarmed and ordered his crew to abandon ship in the lifeboat which would have remained attached to the larger vessel by a rope. For some reason, perhaps an ensuing storm, the rope may have been severed and the boat and ship separated, with the smaller vessel then being lost in the stormy weather. Others have speculated that a seaquake or other extreme weather phenomenon may have caused the captain to wrongly believe that the ship was sinking, forcing an abandonment of the vessel with similar consequences.

Although the ghost ship of popular imagination doesn’t quite correspond with the reality of the Mary Celeste incident, a review of the ship’s history does pose the intriguing question of whether a ship can really be “cursed” or “ill-fated.” The Mary Celeste was originally called the Amazon. Her first captain died within two days of the ship being christened, and her entire sailing history was to be strewn with accidents and misfortunes.

It seems that seamen began to be wary of her and so, after one accident, she was sold off, refitted, and renamed the Mary Celeste. Even after the tragic incident the ship continued in service for a number of years but, again, it seems that everyone tried to steer clear of her. In the end, the ship’s owners attempted to pull off an insurance scam by deliberately wrecking the ship and claiming re-imbursement from the insurers for a valuable cargo (which did not, in fact, exist). Even that didn’t go right. The ship was beached. The insurers investigated the claim, found it to be fraudulent, and the would-be perpetrators of the scam were convicted of a crime.

Was it a cursed ship? Is there such a thing? Perhaps there was a real mystery to the Mary Celeste after all.

The Bermuda Triangle
Share Your Story, Join the Discussion or Seek Advice..
The Mary Celeste is a fascinating ship. Is it still around in a museum or something? I would like to have a look at it for myself. Apparently one of the open barrels of beer looked like it was tampered with.
Jazz - 2-Apr-11 @ 7:25 AM
Title:
(never shown)
Firstname:
(never shown)
Surname:
(never shown)
Email:
(never shown)
Nickname:
(shown)
Comment:
Validate: