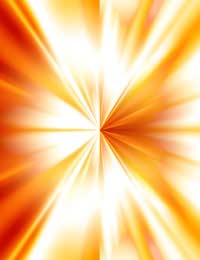 Spontaneous human combustion (SHC) is one of the spookiest phenomena we know of. It seems utterly bizarre, almost unbelievable, yet it does appear to exist.

What is it? Spontaneous human combustion occurs when a person simply bursts into flames for no obvious reason and is then entirely, or almost entirely, incinerated : reduced to ashes.

The phenomenon has been known about for quite some time. In fact, Charles Dickens wrote about it in the 19th century. He even had the character Krook die from it in his novel Bleak House. When he was criticised for encouraging superstitious nonsense, he replied that he had researched the subject and was convinced it really existed.

What distinguishes the victims of SHC from those of a normal fire? First of all, there is the extent of destruction to the body. Our biology actually makes the human body very resilient and it is extremely difficult to reduce it to ashes. Cremation ovens are specially designed to achieve the temperatures of up to thousands of degrees centigrade which are required to incinerate bone. A normal house fire is incapable of doing this. Yet in SHC cases, the victims is almost vaporised. In the 1951 case of Mary Reeser, for example, only her foot remained, together with a shrunken skull and some teeth.

The second very strange thing about SHC is that, in most of them, the fire seems to damage only or primarily the victim, not the surrounding environment. Referring to the Reeser case again, her remains were found in her living room, containing a highly flammable carpet and furniture. Yet the fire did not spread.

Charles Dickens portrayed SHC as a consequence of a person’s unpleasant nature : vile, noisome vapours circulated in the body of a mean-spirited person, he believed, creating a flammable mixture. A modern variant of this explanation, shorn of the moral component, is that digestive gases are what create the fiery potential.

The religiously inclined tend to believe that SHC victims are suffering from the judgement of God. Certainly, the phenomenon does bear a striking resemblance to traditional depictions of angry gods throwing down thunderbolts at mortals who have displeased them.

More recently, an explanation called the “wick effect” has been put forward. According to this theory, the fat on the human body acts like a candle, while the person’s clothes act like the wick. Some would-be debunkers of paranormal phenomena have seized on this term “wick effect” triumphantly. Unfortunately, the explanation fails to account for what started the fire in the first place.

In searching for explanations of SHC, it’s clear that two things would be very useful : eyewitnesses or survivors! There have indeed been eye-witnesses to cases of SHC. In 1982, the Saffin family of London claimed their 62 year-old relative Jean suddenly burst into flames right in front of their eyes. Of course, sceptics usually claim that the victims of SHC are actually the victims of murder, and fire has simply been used to cover up the evidence. Under this interpretation, then, the supposed eye-witnesses are actually the murderers so their testimony is not to be trusted. An inquest into Jean Saffin’s death recorded an open verdict.

SHC featured in a French murder trial as far back as the 18th century. In that case, a man was accused of killing his wife and trying to burn her body. He insisted that she had just burst into flames in front of him, however the court accepted his truthfulness and found him not guilty.

There have also been survivors of what appear to be cases of Spontaneous Human Combustion. In 1991, for example, Winifred Gowthorpe, who lived in Yorkshire, reported that strange burn marks had mysteriously appeared on his arms and hands. No source of the burning was apparent, and the clothes he had worn were completely undamaged.

In 1985, Australian man Frank Clewer managed to build up 40,000 volts of electricity in his nylon and woollen clothes as he went for a job interview. After a few minutes’ conversation, he had managed to burn a hole in the carpet. A sound of crackling electricity was heard all around him. Thinking that some engineering problem must have occurred in the building’s infrastructure, all staff were evacuated. Only later did they realise the true cause of the problem.

Spontaneous Human Combustion remains a true modern mystery. The best efforts of our scientists have failed to account for it completely. Though the so-called “wick effect” may be part of the answer, other substantial questions remain.
Next Page