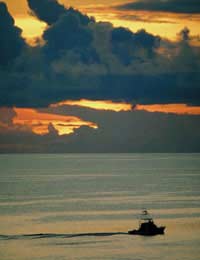 The Bermuda Triangle lives in the popular imagination as a place where a host of planes and ships have vanished without a trace. Although its exact boundaries tend to vary slightly with each author who writes about it, broadly speaking, the points of the triangle are said to be formed by Bermuda, Puerto Rico and Florida.

The Triangle features directly or indirectly in many Hollywood movies. Stephen Spielberg’s Close Encounters of the Third Kind, in a scene close to the start of the film, references one of the most famous of the disappearances, that of the five US Fighter Bombers of Flight 19, who were lost at sea while on a training mission in 1945. Neither their bodies nor their aircraft were ever recovered. This characteristic of being lost without a trace was to be typical of so many of the disappearances, even those of vast, hulking freighter ships and, for many; this represented the kernel of the mystery.

Bermuda Triangle – The Rise and Fall of an Idea

The term Bermuda Triangle was coined in a 1964 article by Vincent Gaddis. The notion that the area was a hotspot for mysterious vanishings had first been floated in 1952 by George Sands but something in the phrase Gaddis employed to describe it seemed to tingle the public’s imagination. Soon others picked up on the idea and ran with it. Books, articles and documentaries flooded forth, all embellishing the idea that something very strange was going on off the American continent’s Eastern seaboard.

Limbo of the Lost by John Spencer expounded the idea that extra-terrestrials were responsible for the disappearances: that UFOs were kidnapping humans and their vessels, possibly taking them as specimens so that something of humankind would be preserved in the event of a global cataclysm such as nuclear war. Charles Berlitz’s book The Bermuda Triangle explored several of the more exotic possibilities and became a best-seller. Berlitz covered the UFO angle, as well as the notion that perhaps super-powerful artefacts from an Atlantean civilisation lost beneath the waves were disrupting the instruments of the ships and planes, bringing about the accidents.

After the notion had become fairly well established in the public mind, however, some people decided to investigate it systematically, comparing the statistics on actual fatalities and disappearances with other comparable waterways in the world. On doing so, they claimed that the mystery really wasn’t one: that it was all a fuss over nothing and the statistics didn’t bear out the idea that the rate of disappearances there was unusually high. Larry Kusche articulated this sceptical point of view in his 1975 book The Bermuda Triangle Mystery Solved.

The US coastguard has consistently scorned the notion that there is anything strange going on in the Bermuda triangle. Their website points out that it is a very busy waterway in a region known for turbulent weather. The Bermuda triangle is also one of only two places in the world where magnetic north and true north are perfectly aligned. This requires navigators to make special adjustments to compensate. Perhaps failure to do so accounts for some of the mishaps. Suggestively, the only other region of the world with the same characteristic, an area of water in Asia known as the Devil’s Sea, is also associated with the strange disappearances of ships and aircraft.

The Bermuda Triangle – The Persistence of Belief

Today most researchers, even those who are otherwise receptive to the idea of paranormal phenomena, tend to reject the notion that there is anything out of the ordinary going on in the stretch of American waterway known as the Bermuda Triangle.

Believers still exist, but they are far less numerous than before. They cite the “survivor” stories mentioned in the Berlitz book: those who claimed to have experienced bizarre phenomena in the triangle area which almost proved fatal to them, though, in the end, they managed to escape. These survivors talk of bizarre water currents which sucked a ship underwater with tremendous speed, a strange fog which caused shipboard instruments to malfunction, planes which struggled to stay aloft after encountering extreme turbulence. And they point insistently to the fact that so many of the incidents in the Triangle area don’t just involve accidents, or fatalities, but complete disappearances altogether.

How common is it in other parts of the world for ships and aircraft to disappear completely, they ask? Most of the modern believers tend to shy away from the wilder theories which were popular in earlier decades. Though there is undoubtedly something strange going on, they insist, there may well be a natural phenomenon at the root of it, such as an extreme and poorly understood weather effect.

One obvious question is: are the mystery disappearances still occurring? Much of the literature on the phenomenon dates from the 60s and 70s. Since the Kusche “debunking” book appeared, its thesis has been broadly accepted and not much more research on the subject has been done. There are still a few aficionados out there, however, and they do insist that the mysterious vanishings are still occurring. Perhaps one day the tide of opinion will turn, and the issue will be examined again.