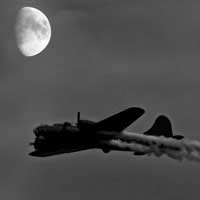 Throughout the latter stages of the Second World War Allied pilots reported seeing strange objects which appeared to be tagging along beside their planes. They gave them the name foo fighters. Foo fighters often presented themselves as glowing balls of light, shifting in colour from red to orange then white and back again. Sometimes they would appear alone, at other times in formations of up to 15. They were seen principally over Germany, although some were noted in other parts of Axis-occupied Europe, and there were even sightings over Japan. Some pilots reported that when they took evasive action, the foo fighters would change course to maintain their relative position.

There is no general consensus today on what lay behind the foo fighters phenomenon. There are three main schools of thought. The first is that the foo fighters were alien spacecraft, manned or perhaps remotely operated by extra-terrestrials who had been moved to take an unusual interest in our planet by the carnage the war had unleashed and the prospect of even greater carnage in future resulting from the use of atomic weapons. No one believed this at the time the sightings occurred. It was not until after the war that the UFO craze and the notion of aliens visiting us in spacecraft really entered the public consciousness. When it did, however, some retrospectively re-interpreted the foo fighter reports.

The second interpretation of the foo fighter reports holds that they were a secret German technology. German scientists and weapons technicians had achieved some remarkable advances in the spheres of rocketry and propulsion. Was it too much to think that they might have come up with some kind of bizarre anti-aircraft weapon?

This indeed is how the foo fighters were reported in the news media at the time. Here is a short article which appeared in the New York Times on December 13th, 1944 :

"A new German weapon has made its appearance on the western air front. It was disclosed today. Airmen of the American Air Force report that they are encountering silver coloured spheres in the air over German territory. The spheres are encountered either singly or in clusters. Sometimes they are semi-translucent."

Some writers have claimed that the foo fighters interfered with radar, forcing some bombing missions to be aborted, though others dispute this. There are no reports of foo fighters damaging or even engaging enemy aircraft. When allied aircraft attempted to engage the foo fighters, they would disappear or fly off at great speed, only to return later.

If they were indeed anti-aircraft weapons, of what possible use were they then if they could not inflict damage? Some speculate that the weapon was in a prototype stage in which it had been given the capability to track enemy aircraft but not yet to destroy them. There is no proof of this and it must remain entirely in the realm of speculation.

Proponents of the “German secret weapon” hypothesis must explain what happened once Germany was conquered. The confiscation of German technologies and the co-option of German scientists by both sides in the emergent Cold War is now part of accepted history. Did either the US or the Soviet Union acquire secret aerospace technology from the defeated Germans and keep it secret after the war? Could the UFO scare that got going in the immediate post-war years have resulted from tests of this secret technology? The motive for keeping the technology under wraps would presumably have been the emergence of the Cold War and prospect of conflict with the Soviet Union. In the community of UFO researchers, there are indeed those who believe that “flying saucers” are a secret technology being operated by our governments, perhaps deriving from German technology captured at the end of World War Two.

The third school of thought holds that the foo fighters represented nothing: that they were the fictional products of the distressed minds of men frightened by dangerous combat missions and the general stress of wartime, perhaps misinterpreting some natural phenomenon such as ball lightning, or the lights of perfectly normal aircraft.

It is doubtful we will ever know the truth about the foo fighters. Modern UFO sightings tend not to resemble descriptions of these small spherical lights. Even at this distance, however, references to foo fighters are still sometimes found in newly declassified government documents, so who knows what truths might be uncovered in those mounds of mouldering paper one day?