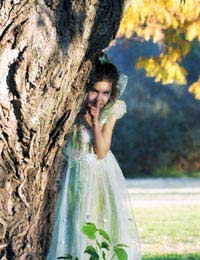 In 1916-17 while the First World War was raging in the trenches of France, two little girls sat playing with fairies in the English countryside; or so they told their parents. But their parents didn’t believe them. So they decided to take some photographs of the fairies as proof. The result was a series of images which were to tingle the British imagination for more than half a century.

In 1916, Frances Griffiths was 10, and Elsie Wright 16. They lived in the small village of Cottingley, in West Yorkshire. One day they borrowed a camera from Elsie’s father, and went off to take some photos. When Mr. Wright developed the images, he asked the girls why there were paper fairies in the photographs. They insisted the fairies were real. He put the photographs in a drawer and left them.

His wife, however, who had a longstanding interest in the supernatural, was intrigued by the images and, five years later, happened to mention them while attending a theosophical meeting in Bradford. Her remarks were overheard by Edward Gardner, a leading theosophist, who asked to see them. When shown the images, Gardner was hugely impressed. He informed his friend, Sir Arthur Conan Doyle, author of the famous Sherlock Holmes stories, who likewise was intrigued.

Doyle considered going public with the story but asked his friend to check out the bona fides of the family and the photographs first. Gardner visited the Wright family in Cottingley and was struck by their apparent sincerity. Photographic experts were consulted. They declared that the negatives were genuine and had not been tampered with. This was enough for Doyle. He published an article in The Strand magazine, proclaiming that the photographs were the long-awaited proof of the existence of the fairy folk. Doyle also arranged for the girls to be visited by the medium Geoffrey Hodson. Hodson claimed that he too saw fairies in the area. Some time later, Doyle even wrote an entire book on the subject called The Coming of the Fairies.

With the prestige of such a famous author behind them, the Cottingley Fairies had been launched into the imagination of the British people. Over the coming decades, they were to be the subject of many further articles and inquiries. The girls talked much less about the fairies in their later lives, though, intriguingly, in a 1975 BBC television documentary, Elsie stated that the images were “photographs of figments of our imagination and that’s what I’m sticking to.”

Two years later, someone stumbled on an old children’s book which had drawings of fairies in it; fairies which bore a remarkable resemblance to those in the famous photographs.

In the 1980s, the girls came clean. Elsie admitted by letter that the girls had faked the photographs, cutting out paper fairy figures and positioning them in such a way as to look real. Frances, in another television documentary made shortly before she died, declared that, even though the photographs were fake, there really were fairies at Cottingley Beck. And she insisted that at least one of the photographs really did show a fairy!